My only target species for this area was Chlamydosaurus kingii, the famous Frilled Lizard. Of course I wanted to see lots of other herps and some wacky marsupials and birds and such, but the “frilly” was head and shoulders and crazy-frill-between-head-and-shoulders above any other species on my personal Most Wanted list.

We had tried to arrive just at the start of the rainy season (known locally as simply “the Wet”), because many animals, including frillies, become active when the rains start to fall. If you wait too long, then you get nearly daily thunderstorms, drenching rain, flooding, etc., and even the possibility of a horrific cyclone such as Cyclone Tracy, which devastated Darwin on Christmas Eve in 1974. If you don’t wait long enough, then you get very hot and humid weather but without rain, and thus with many fewer animals. The chances of seeing a frilly before the rains have started is very low.

We flew from Los Angeles to Brisbane, on Australia’s east coast, and then after several hours of groggy stopover on to Darwin. Darwin is the capital city of the Northern Territory and perhaps the only collection of people and buildings large enough to be called a city in the entire territory.

Our first herp sighting was this giant frog in the Darwin airport, into which Mary is depositing a spare coin to contribute to Australian frog conservation. Mary would like me to add that she looks bedraggled due to the zillions of hours spent on planes and in airports prior to arriving in Darwin. 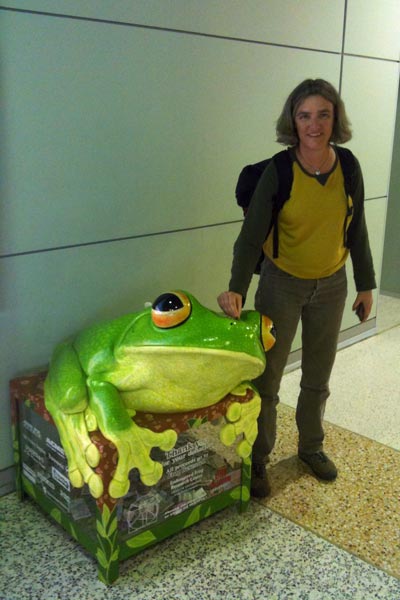 Savanna woodlands make up the vast majority of the natural areas in the Top End. Many woodland areas have been burned annually by the aboriginal people for thousands of years, so the plant communities are a combination of fire-tolerant trees and annual grasses. The trunks of many of the trees are obviously fire-blackened. This is from Charles Darwin National Park on the outskirts of Darwin. 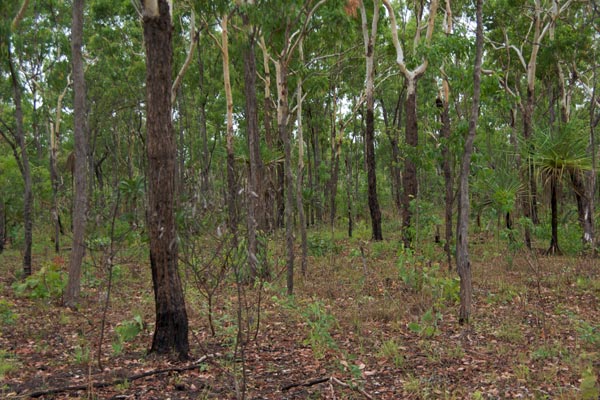 Pockets of monsoon forest are scattered around the Top End. They were once the primary habitat type, when this area of Australia was much wetter than it currently is, but now they make up a tiny fraction of the land, containing a disproportionately high number of animal species. This is Holmes Jungle, a monsoon forest also on the outskirts of Darwin. 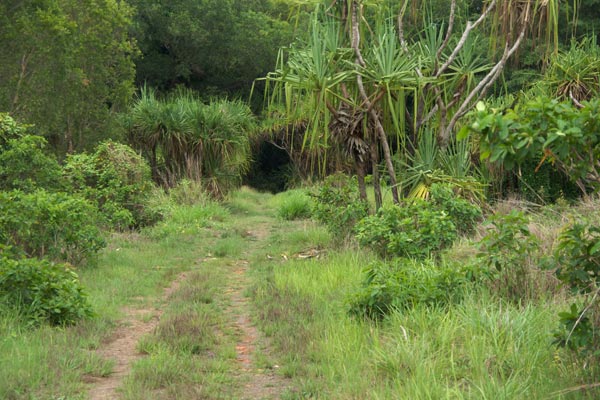 Tiny skinks in the genus Carlia were by far our most commonly observed herps. There are at least a half dozen Carlia species in the areas we visited. It can be hard to distinguish the various species because they are all about the same (very small) size and shape, and the patterns and colors are quite variable even within a given species. But with the aid of several Australian herp guides I think I’ve figured at least most of them out.

I'm pretty confident that these are all Carlia amax (Two-spined Rainbow Skinks), which is the species we saw most often around Darwin and in several other areas. 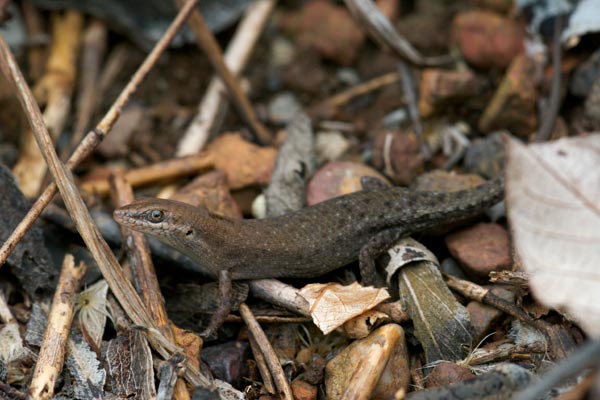 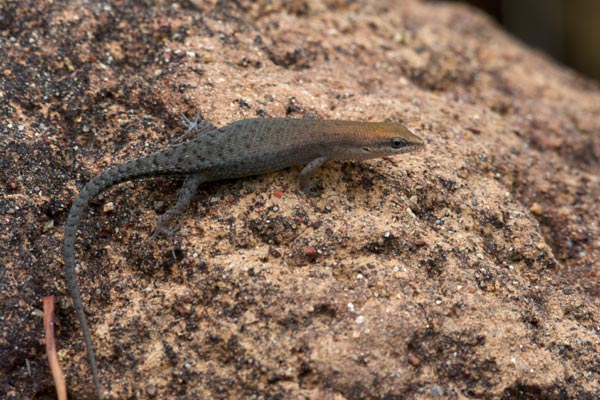 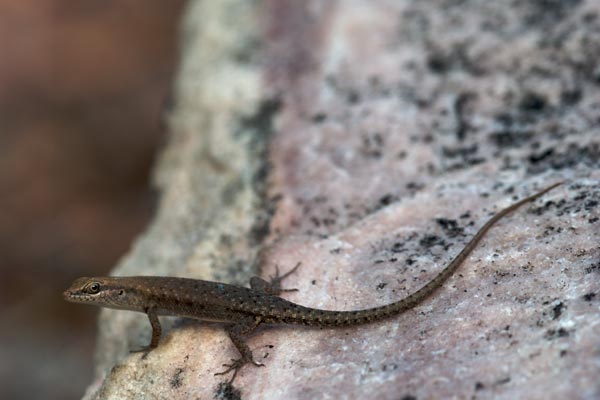 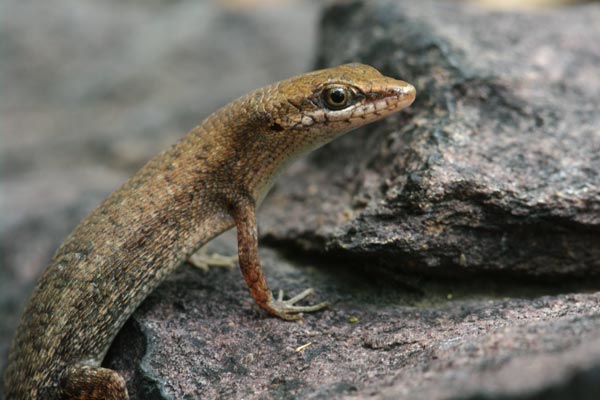 My best guess for this next one is also Carlia amax, though it has much more pronounced speckles than the others. Please let me know if you think my identification for this photo, or any of the others, is incorrect. 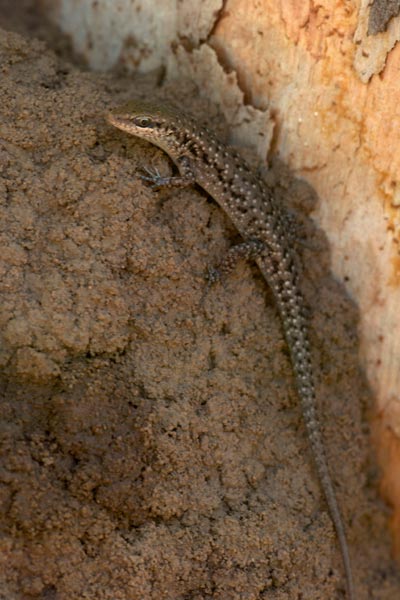 At Mary Billabong between Darwin and Kakadu the local tiny skinks were these Carlia gracilis (Slender Rainbow Skinks). I inadvertently got them all excited by lifting a piece of bark, which disturbed many tiny termites. Five or six C. gracilis came skittering out of the leaf litter to feast crazily on the upset termites. 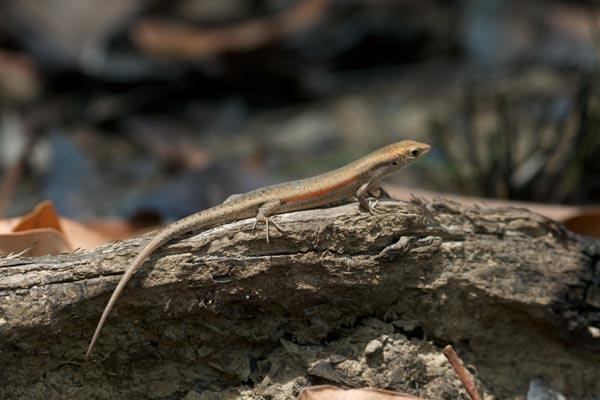 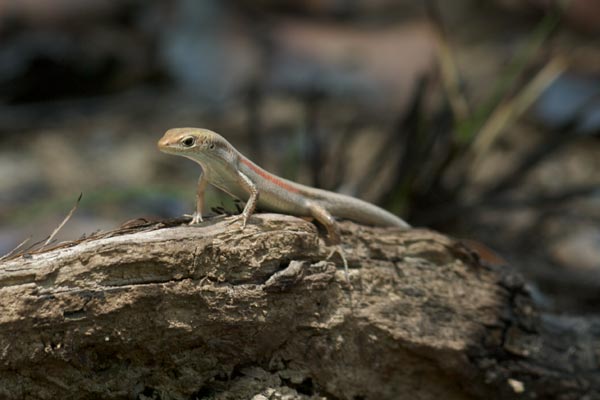 These next two are clearly adult male Carlia rufilatus (Red-sided Rainbow Skinks) displaying their breeding colors. They were the most beautiful of the Carlia that we saw. 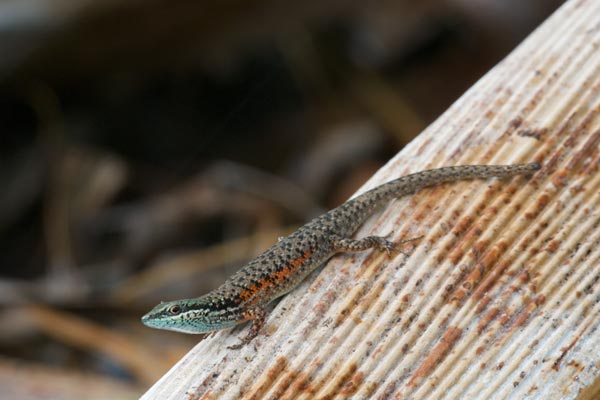 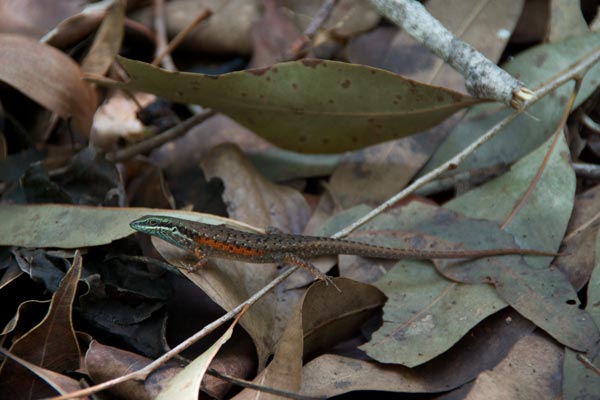 My best guess for these next two are Carlia rufilatus that are not adult males in their breeding colors. But I'm not very confident about that. 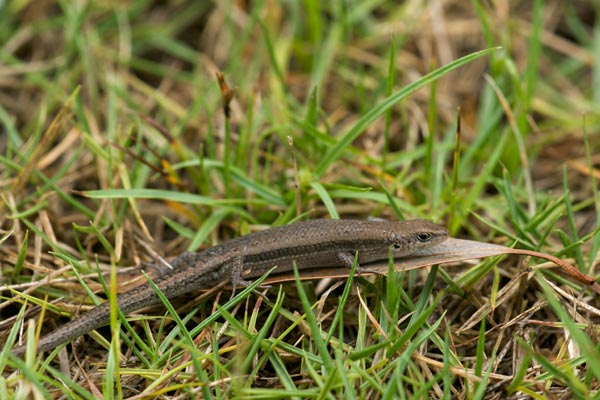 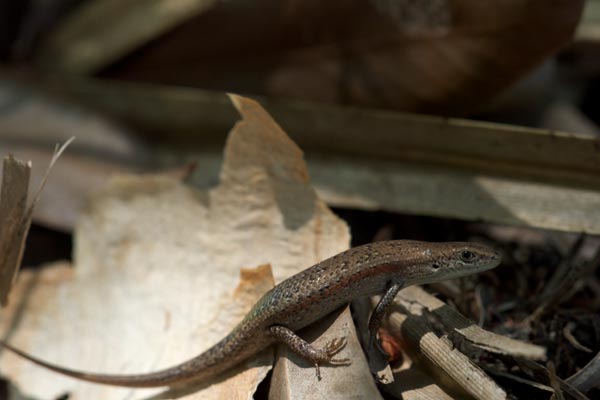 Finally, this is an adult male Carlia munda (Shaded-litter Rainbow Skink) showing off its own breeding colors, which are similar to but less impressive than those of Carlia rufilatus. This is the only skink I photographed of this species, at least if my IDs are correct. 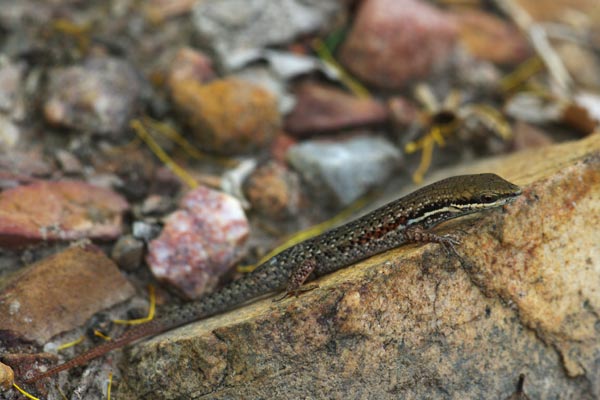 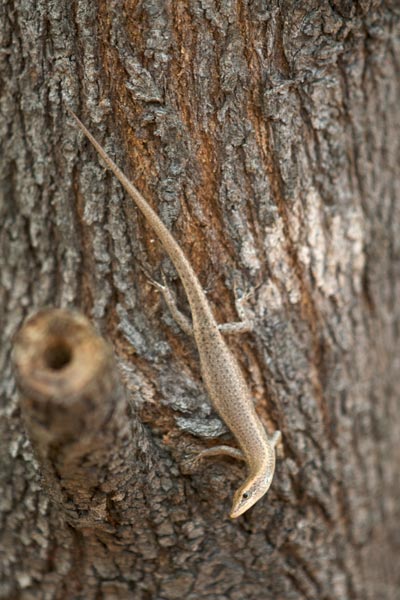 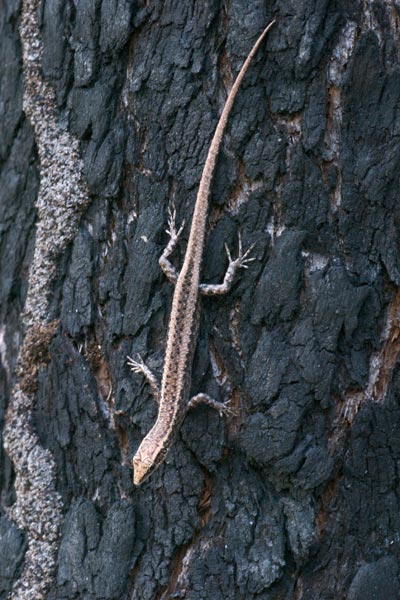 Every once in awhile we’d see a small skink that wasn’t Carlia or Cryptoblepharus. They were always in a hurry, and not interested in stopping to pose for more than a few seconds. After I got home I decided that they were all Ctenotus essingtonii essingtonii (Lowlands Plain-backed Ctenotus). 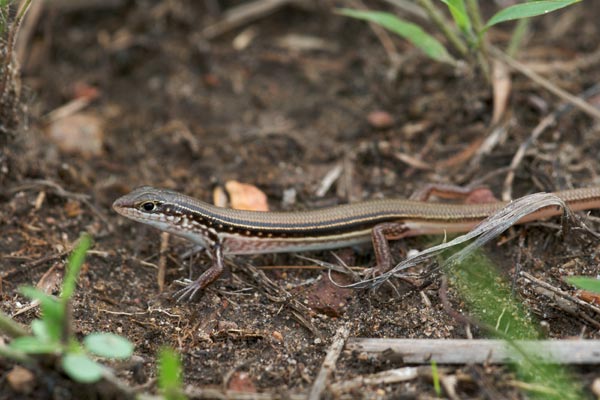 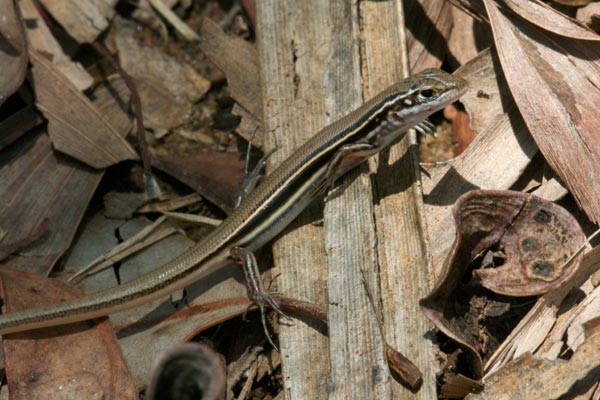 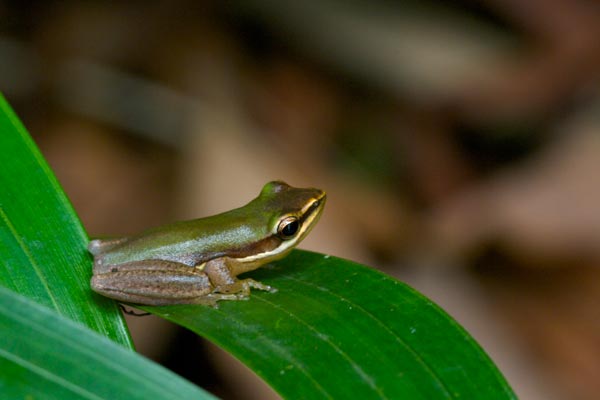 Also at Holmes Jungle, posing on a downed palm tree, was this handsome agamid, unembarrassed by the fly on its head. Lizards that look like this were common around the Top End, but just as with the Cryptoblepharus there are two nearly identical species that live in this area, Amphibolurus gilberti (Gilbert’s Dragon or Ta-Ta Lizard) and Amphibolurus temporalis (Northern Water Dragon). The diagnostic difference between these species involves the angle formed by the rows of keels on the scales near the vertebral line. Got that? I spent quite a while studying each of my photos of these lizards at the maximum magnification in order to come up with a reasonably educated guess at the identifications. I decided this one was probably Amphibolurus temporalis. 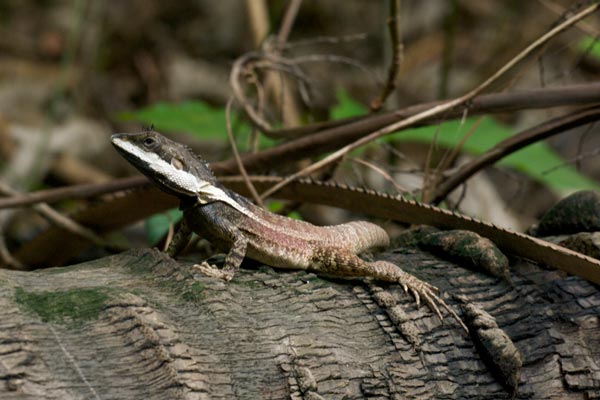 Here are a couple more that I decided were likely to be A. temporalis. The second one shows the pattern of an adult female or juvenile (and yes, adult females and juveniles of A. gilberti look just like this too). 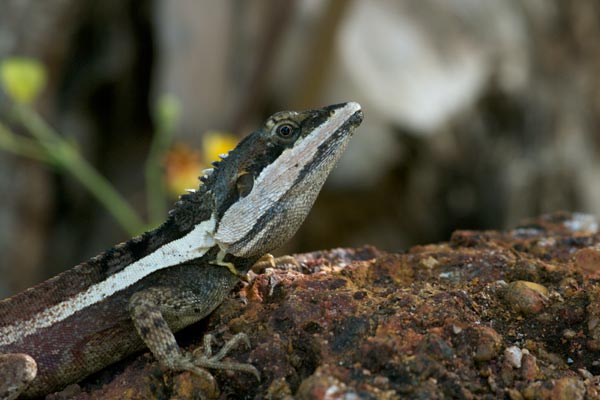 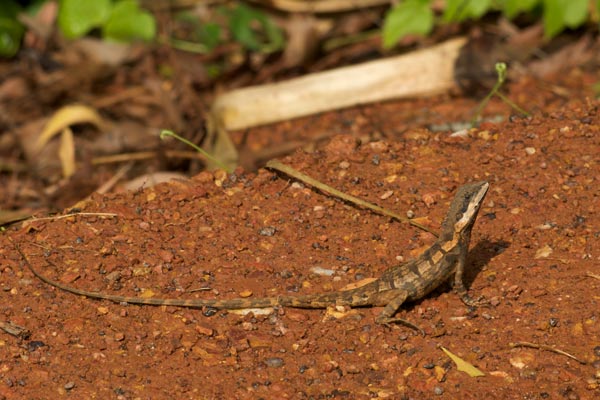 And here’s one that I decided was probably A. gilberti based on its scale pattern. It’s perching on a small termite mound, which is a fine photogenic place for any lizard to perch. 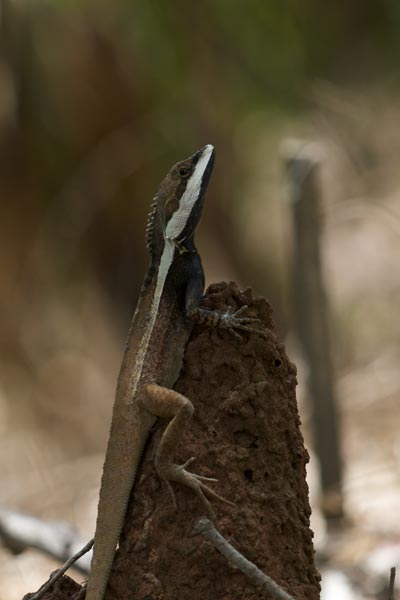 In the leftovers-from-the-Darwin-area category, here’s a small gecko in a Darwin park. Once again, I didn’t get a good look at it at the time, but when I looked at the blurry photo later I realized that it was Australia’s least interesting gecko, the introduced Hemidactylus frenatus (Common House Gecko). Yawn. 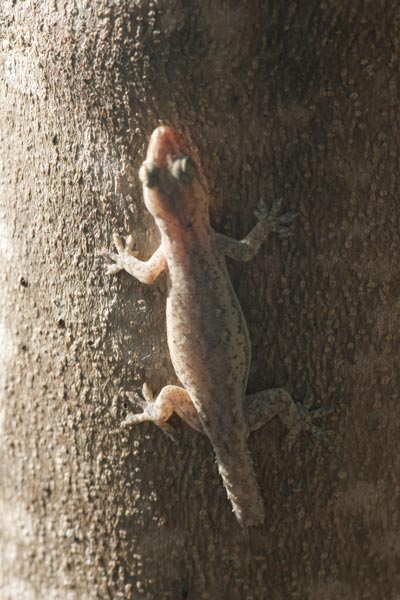